Because asphalt is black or dark grey and since it so widely used it creates urban heat islands as its surfaces absorb sunlight. In summer, its heat absorption raises its temperature to 140° F or more. That heat requires more air conditioning, especially during peak load afternoons and even after sunset. This is requiring much more electricity. Not only does this waste money, but in making electricity, power plants create more greenhouse gasses.

Because asphalt’s strength is based in large part upon volatile organic chemicals, as they evaporate in sunlight they add to the air pollution, while weakening the adhesiveness of the pavement. This requires maintenance through sealing or resurfacing, both of which add to air pollution and greenhouse gasses, and in the future put an additional drain on petroleum resources.

Another consideration is that when afternoon showers hit the hot pavement, water temperatures are heated increasing evaporation and dissolving oil, grease and other volatiles from the surface of the pavement. There harmful pollutants are carried into the storm water system, thus damaging the ecology down stream

Dark asphalt shingle roofs also add to the problem. In the hot sun the asphalt shingles absorb sunlight and thermal pollution. When a rain shower happens, the rain water is heated by the roof. Some of it evaporates, but the hot water remaining is carried by the gutter system to impervious surfaces or to streets and then to the storm water system. If it was caught by pervious concrete it would cool off while being filtered and sent to the thirsty aquifer. 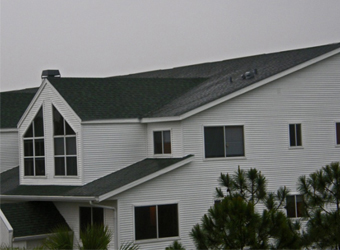 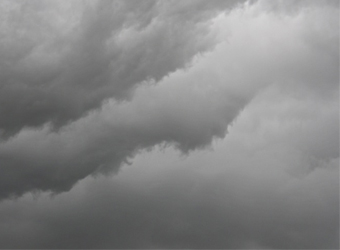 As is seen in the pictures below, rain water from hot roofs often spills onto impervious driveways. They carry it to hot asphalt streets. This continues to keep it warm until it enters the storm water system. Finally it becomes storm water which adds chemical and thermal pollution to streams or estuaries of the Gulf or the Oceans. 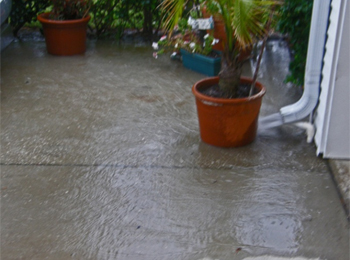 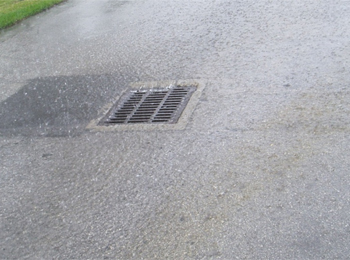