Black pavements and hot impervious roofs are taking more and more natural planted surfaces out of doing what they do best. Natural surfaces like grass and trees absorb sunlight and through photosynthesis they remove that Global Warming gas, Carbon Dioxide, as well as other pollutants from the air we breathe. Also their roots and foliage help trap storm water and move it to the underground aquifer.

If you are concerned about global warming, consider this: Asphalt pavements absorb more of the heat of the sun. This adds to the problem. Because asphalt is so widely used it creates heat islands as its black or grey surface absorbs sunlight. In summer its temperature may climb to 140° F or more. Evan after dark the asphalt radiates heat. That heat requires more air conditioning thus requiring more electricity. Most electricity is generated using fossil fuels. So not only does this waste money, but in making electricity, power plants create more greenhouse gasses.

Even impervious concrete absorbs much heat from the sun. Of the three, pervious concrete is the coolest. When it rains on hot pavements, the rain evaporates more quickly. Less water reaches the aquifer or other runoff receptors. Without Pervious Pavements, what eventually reaches streams, estuaries, the bays, the Intracoastal Waterway and the Gulf of Mexico or ocean is warmer water. It affects everything living in those waters changing the balance of nature.

Can’t you feel the heat coming off of this pavement in summer? Can you imagine how much cooler the concrete sidewalks are? And if those sidewalks were pervious concrete they would be even cooler. The reason is that concrete reflects sunlight much better than asphalt which turns it into heat.

New concrete has a solar reflective index (SRI) of 38 to 52, Pervious concrete about 29 and aged asphalt (grey) 6. New asphalt has an SRI of 0.

Have you ever walked through the woods and heard the sound of a waterfall? As you approached, especially if it was summertime, you noticed that as you got closer, the air got cooler! Why? As the water tumbled down over the rocks some of it evaporated. Plants and trees whose roots sucked up some of the water. Then through an evaporation process called aspiration those plants helped cool the whole area! 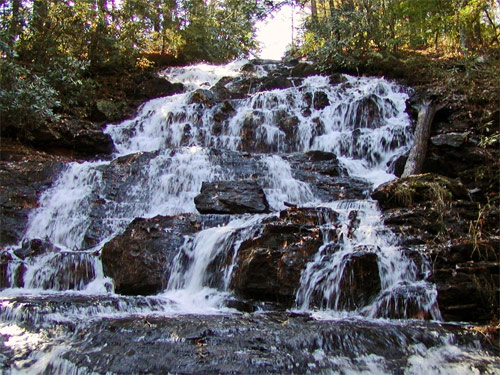 As water turns to vapor it absorbs heat, lots of it! Each gallon that evaporates absorbs the equivalent of 2/3 of a ton of air conditioning. Whether that vapor comes from the brook or the plants around it, you feel cooler because of it! Pervious concrete helps turn water into vapor too!